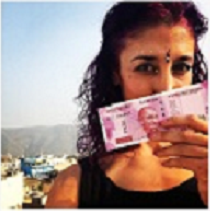 Posted at 09:28h in Uncategorized by admin 0 Comments
0 Likes

Do you remember the great depression? Neither do I. It was nearly a century ago which seems like an eternity. On November 8th not only did the unthinkable happen. Donald Trump won the presidency for the good ole US of A. I shake my head in disbelief having to admit that, typing the words in dismay and disgust. Half way across the world Mudi, India’s prime minister would ban 500 and 1000 rupees notes from circulation. 86% of the currency was now useless. The drastic move was intended to to flush out “black money” hidden from the tax man. I had just taken out 20,000 rupees to cover my costs- the notes were all in the now banned currency. What to do? Banks were closed for the next two days. When they did open it was complete chaos.

Every time I looked at the line for the bank I got anxiety. My shoulders would draw up towards my ears and I had to consciously pull them down and back. What is going on in this situation that would give me anxiety? Where would this come from? Sometimes this introspection is more clear and I am able to sort it out and or get over it. However in this situation that wasn’t the case. The line was at least one hundred Indian men that lead to a security guarded chain gate entrance. Three tired looking but aptly eager Indian men stand at the front of the supposed line. The formation of the line is clear until you get close to the door- which is a chain gate. I could only imagine what the situation is like inside. No manners, which breeds a wealth of germs as men and women alike hawk up and spit out whatever is in their throats. Coughing, sneezing- none of which people cover their mouths or noses. Poor air circulation I suspect, which I can only imagine would exemplify whatever scents were wafting about. Deodorant isn’t a traditional form of hygiene- think curry mixed with sweat- mmm mmm.

As a foreigner you don’t have to wait in line. Yay! However, there was also a line for foreigners too. My last bank exchange attempt I got groped, panicked and beelined out of the chaos. I was informed that after the 24th of November 500’s and 1000 bills would be officially not usable. Foreigners were only allowed to exchange at 4000 rupees at a time. So I had five trips to the bank to complete this exchange. Gross and sigh. I recently watched my dear friend Maro deposit a check with her phone via app. The good ole days in America. I made my way into the bank effortlessly. Lines were vague but the small group of white faces in a sea of brown would prove to be where he foreigners would exchange money. A form needed to be filled out along with passport and copy of passport. No more than 4000 rupees was to be exchanged. My feeble attempt to get more with receipt of 20000 rupee purchase failed. In addition, the rather pleasant small Indian woman behind the counter smiled as she informed me that I could not come back to this bank for an additional exchange. Lovely. She suggested at exchange at the airport. But what if I am not going to the airport was my response. Insert head bobble here. It took me an hour to reach the front of the line to drop off paperwork. After, you proceeded to queue number two where you stood in the same line again for the official exchange of old money for usable money. I wonder what they did with all that paperwork. What a waste of trees. Nearly two hours later I had successfully exchanged 4k rupees. What a joke. I was in no rush to go through that ordeal again and alas I wouldn’t be able to at least at this bank.

The next bank trip would prove to be challenging per usual however the bank that we opted for was quite clean and well kept. There were five English people ahead of us who were battling with Vijay, the poor bank guy for thirty minutes, no exaggeration. They demanded to be helped. Ironically they had nothing that needed to help themselves through the process. Simply observing the ridiculous interaction put things in perspective for me. The money situation sucked but there was only so much you could do or expect anyone else to do for you. The English milled about, literally at the bank making copies of their passports, rookies. Anyone will tell you what you need to change money- passport and photocopy along with money and exchange form. Behind them was an Argentinian couple who had just been there three days prior. Exchanges can only be made once a week. The couple pleaded as Vijay said it had nothing to do with him he couldn’t process it because they were already in the system. They pleaded with him asking him what they could do. The answer was so simple, go to another bank. Not sure where or why they didnt get it but Vijay called me up. I had everything in order and was through within minutes. Only to wait in another queue. I beat the English people that were ahead of me but stayed until Gaya got her change. Unfortunately she was stuck behind the people who didnt fail to keep complaining the whole time. This had really put a damper on their India experience I overheard one say. An hour an forty minutes later we had successfully exchanged 4,500 rupees. 500 rupee increase since the exchange five days ago.

The following week. No money was being exchanged, period. Foreigners were allowed to exchange 5k per week however no bank was honoring this. I went back to Vijay who seemed like he may have an intelligent answer as to where I needed to go to exchange the last of the old money that I had. His “intelligent” answer, write my embassy.  There was never an answer to this and I ended up giving the money to Indian friends who slowly gave me back the cash in usable form.

Currently the money situation isn’t terrible. There is usually a working ATM at least two days a week.  You can only withdraw 2,000k rupees at a time. However you can stand there and take out at much as you actually need. In theory at least. While the locals come with multiple cards from god knows where and spend too long trying to figure out which card is what and why a pin isn’t working or is it a wrong button they are pushing. Needless to say locals aren’t very good with using the ATM. This can slow things down significantly. Generally speaking it takes any where from half an hour to an hour to get out $100 US. It could be worse. I have heard that in Goa the money situation is still problematic. I also heard that Goa would be the first place to get automated. Meaning accepting credit cards. While I love this idea, I used to patronise a grocery store because they did take credit cards. Half the time if not more they didnt have the connectivity to pull it off. Only time will tell what will happen.